Posted By admin 3 Comment(s) 688 View(s) About Mathematicians
7th June, 2021 was 67th Remembrance Day of Alan Mathison Turing a brilliant English mathematician and computer scientist. His work was fundamental in the theoretical foundations of computer science.

In 1936 he published On Computable Numbers, with an application to the Entscheidungsproblem. It is in this paper that Turing introduced an abstract machine, now called a "Turing machine", which moved from one state to another using a precise finite set of rules (given by a finite table) and depending on a single symbol it read from a tape.

Together with another mathematician W G Welchman, Turing developed the Bombe, a machine based on earlier work by Polish mathematicians, which from late 1940 was decoding all messages sent by the Enigma machines of the Luftwaffe. The Enigma machines of the German navy were much harder to break but this was the type of challenge which Turing enjoyed. By the middle of 1941 Turing's statistical approach, together with captured information, had led to the German navy signals being decoded at Bletchley.

From November 1942 until March 1943 Turing was in the United States liaising over decoding issues and also on a speech secrecy system. Changes in the way the Germans encoded their messages had meant that Bletchley lost the ability to decode the messages. Turing was not directly involved with the successful breaking of these more complex codes, but his ideas proved of the greatest importance in this work. Turing was awarded the O.B.E. in 1945 for his vital contribution to the war effort.

Turing was elected a Fellow of the Royal Society of London in 1951, mainly for his work on Turing machines in 1936. By 1951 he was working on the application of mathematical theory to biological forms. In 1952 he published the first part of his theoretical study of morphogenesis, the development of pattern and form in living organisms. This paper became fundamental for bridging mathematics and biology what we call today as Mathematical Biology. It is wonder that Turing worked on several areas efficiently in his short span of life before passing away at a young age of almost 42 years.

Pie Mathematics Association pays tribute to this great scientist by remembering and sharing about him with young generation. We are sharing image of his statue kept at Sackville Gardens, Manchester and picture of description about it. 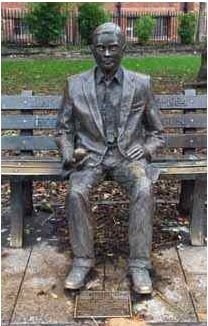 Nice Blog. I would like to say you that keep sharing more!